Can you believe we’re already halfway through March? This winter has felt especially grim, but now, all of a sudden, it seems spring is upon us. The days have been getting longer, and the ice and snow are starting to melt. I’m finding myself dreaming of warm summer days and some much-needed sunshine.

It’s funny how working in a school can change your perception of time. Recently, a colleague mentioned that her friends in other professions often moan about how long their days feel. We agreed that’s never the case when you work with kids and spend every minute of your day being on. There’s so little time to sit down, or take a break, or even catch your breath, and before you know it, it’s Christmas break. Then March Break. And then summer arrives and another school year has come and gone. Before long, kids you’ve known since kindergarten are graduating from high school. Sometimes, my colleague remarked, you wish things would just slow. down. Even for a minute.

When you constantly feel like you’re racing against time, it becomes that much more important to pause every once in a while and take it all in; to live in the moment and appreciate just how lucky we are to do what we do.

One of the ways I’ve been slowing down lately is by spending more time reading. Being a librarian, I think most people assume that all I do is read. But the truth is, even though I spend my days surrounded by books, I actually spend very little time enjoying them. I’ve therefore been making more of an effort to find time to read, whether that means waking up a bit earlier on weekends; sneaking in a few pages during my lunch break; or reading in bed at night before I drift off to sleep. I’ve really come to enjoy this time to myself, where I can slow things down and quiet my mind, while still focusing in on something I truly love.

I don’t know if it’s the current state of the world — or just feeling exhausted by the sheer number of male voices we’re forced to listen to on a daily basis — but I recently began to notice myself being drawn more and more to female (and female-identifying) writers. It didn’t start out as an intentional thing, but I loved uncovering these stories, and soon began seeking them out with greater intent.

Now I’ve decided to take this a step further with a pledge: For the rest of 2019, I’ll only be reading books by women. Below are a few titles I’ve read and loved so far, along with brief descriptions from their respective publishers. To see more of my reading life, feel free to connect with me on Instagram.

Not That Bad: Dispatches from Rape Culture (Edited by Roxane Gay)

“In this valuable and revealing anthology, cultural critic and bestselling author Roxane Gay collects original and previously published pieces that address what it means to live in a world where women have to measure the harassment, violence, and aggression they face, and where they are “routinely second-guessed, blown off, discredited, denigrated, besmirched, belittled, patronized, mocked, shamed, gaslit, insulted, bullied” for speaking out. Contributions include essays from established and up-and-coming writers, performers, and critics, including actors Ally Sheedy and Gabrielle Union and writers Amy Jo Burns, Lyz Lenz, Claire Schwartz, and Bob Shacochis. Covering a wide range of topics and experiences, from an exploration of the rape epidemic embedded in the refugee crisis to first-person accounts of child molestation, this collection is often deeply personal and is always unflinchingly honest. ” (HarperCollins)

Men Explain Things to Me (By Rebecca Solnit)

“In her comic, scathing essay Men Explain Things to Me, Rebecca Solnit took on what often goes wrong in conversations between men and women. She wrote about men who wrongly assume they know things and wrongly assume women don’t, about why this arises, and how this aspect of the gender wars works, airing some of her own hilariously awful encounters. She ends on a serious note— because the ultimate problem is the silencing of women who have something to say, including those saying things like, “He’s trying to kill me!” This book features that now-classic essay with six perfect complements, including an examination of the great feminist writer Virginia Woolf ’s embrace of mystery, of not knowing, of doubt and ambiguity, a highly original inquiry into marriage equality, and a terrifying survey of the scope of contemporary violence against women.” (AK Press)

“When Abbi Jacobson announced to friends and acquaintances that she planned to drive across the country alone, she was met with lots of questions and opinions: Why wasn’t she going with friends? Wouldn’t it be incredibly lonely? The North route is better! Was it safe for a woman? The Southern route is the way to go! You should bring mace! And a common one… why? But Abbi had always found comfort in solitude, and needed space to step back and hit the reset button. As she spent time in each city and town on her way to Los Angeles, she mulled over the big questions– What do I really want? What is the worst possible scenario in which I could run into my ex? How has the decision to wear my shirts tucked in been pivotal in my adulthood? In this collection of anecdotes, observations and reflections–all told in the sharp, wildly funny, and relatable voice that has endeared Abbi to critics and fans alike–readers will feel like they’re in the passenger seat on a fun and, ultimately, inspiring journey.” (Barnes & Noble)

Some other books that are currently topping my TBR list include:

Have you read any of these books? Are you currently taking part in a reading challenge of your own? I’d love to hear your thoughts. In the meantime, happy reading 🙂

Erica is a school librarian and recently turned vegetarian currently residing in the nation's capital. She loves reading, making crafts, and cooking up delicious, meat-free meals. Thanks for following along! View all posts by Erica

This site uses Akismet to reduce spam. Learn how your comment data is processed. 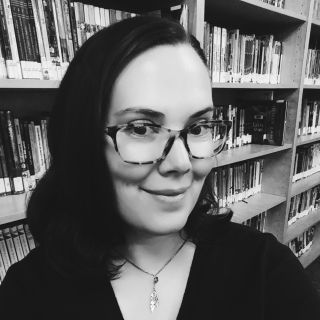 Erica is a school librarian and recently turned vegetarian currently residing in the nation's capital. She loves reading, making crafts, and cooking up delicious, meat-free meals. Thanks for following along!